This year Lohri festival falls on 13 January, and is celebrated with full enthusiasm. It is a day before Makar Sankranti. It also marks the passing of the winter solstice, the end of winter, and is a traditional welcome of longer days. Hindus and Sikhs predominantly celebrate it in Punjab.

This festival is traditionally associated with the harvest of rabi crops. Even Punjabi farmers view Lohri (Maghi) as the financial New Year. It is time to harvest sugarcane crops. Three edibles are associated with the Lohri festival, revri, peanuts, and popcorn.

The Lohri Festival is a time to celebrate the harvest season and rejoice at the start of a new year. On January 13, people light bonfires and celebrate with friends and family. The celebration includes laddoos which are made of sesame seeds, flour, ghee, and sugar. Lohri was added to the Guinness Book of Records for the most people in a giant North Indian group dance.

In the history of Lohri, there have been numerous origins. Lohri's theme is the belief that it is the enlightenment celebration of the Winter Solstice. One of the characteristics of Lohri is the bonfire. It signifies the return of longer days by lighting the fire at winter solstice festivals throughout history.

The name Lohri comes from the word Loi. Loi was the wife of Saint Kabir.

Some believe that the name Lohri is derived from the word Loh.

Loh refers to the warmth and light of a fire.

Significance of the Lohri Festival

In the state of Punjab, the breadbasket of India, wheat is the major winter crop, which is planted in October and reaped in March or April. Before cutting & gathering the crops, farmers celebrate the Lohri festival in January to swear off a golden harvest.

During this period, the earth is the farthest from the sun initiates its journey towards the sun, thereby ending the coldest months of the year, Paush. Following the Bhagavad Gita, this is the time when Lord Krishna shows himself in his full splendor. Hindus annul their sins by taking a bath in the Ganges River, which marks the beginning of Magh and Uttarayan.

As the sun sets massive bonfires are lit in harvested fields and front yards. Around the flames, people humming popular folk songs, tossing puffed rice and popcorn into the fire. They pray to the fire God, to sanctify the land with prosperity and abundance. Five main items are included in the prasad Gajak, til, jaggery, popcorn, and peanuts.

People celebrate the end of the winter season with the Lohri festival, also known as the harvest festival, in which they create a bonfire and dance around it in celebration of the harvest of crops. As a festival that brings together friends and family, Lohri holds a special place in Punjabi hearts. 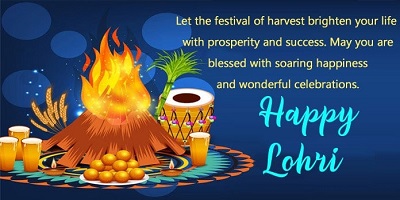 May the Lohri fire burn away all your sadness and bring you joy, happiness, and love.

May this Lohri festival connect you with your friends and family, and give you blessings for the future. - Happy Lohri!

Wishing you a blessed Lohri with your loved ones. Lohri is the time to celebrate with your family and friends and make it a special evening with hopes for a brighter and happier future. Happy Lohri.

We celebrate many festivals throughout the year in different styles. Every festival is unique, read about the most popular festivals of India like Pongal History, Wishes, Images, Messages, Wallpaper, Food.

Q. Why do we Celebrate Lohri?
Ans. People in the northern region of the Indian subcontinent celebrate Lohri as a traditional welcome of longer days and the sun's journey to the northern hemisphere following the winter solstice.
Q. What is the date and time of Lohri in 2023?
Ans. The date and time of Lohri is January 13, 2023 (Thursday) 08:57 PM.
Q. How do we celebrate the Lohri Festival?
Ans. On Lohri, people create a bonfire and dance around it in celebration of the harvest of crops.
Q. What is the Bonfire ritual?
Ans. As the sun sets massive bonfires are lit in harvested fields and front yards. Around the flames, people humming popular folk songs, tossing puffed rice and popcorn into the fire. They pray to the fire God to sanctify the land with prosperity and abundance. Five main items are included in the prasad Gajak, til, jaggery, popcorn, and peanuts.